After some rather scathing feedback from a community peer, and as a person who struggles with public speaking and social anxiety, I have been working hard to get involved with the Umbraco community to try and conquer my fears.

People who have met me would probably describe me as a confident person with a big personality. They would most likely say I am somebody who is always looking to be involved with social situations and someone who is keen to talk to others.

But I would say this is not quite accurate.

I have learnt to put up a facade or persona in group and social situations. This persona comes across as confident, using humour to draw laughs to fit in and feel involved with other people. I use it to cover my insecurities when I am in a group, usually if there is a fear of being "out of my depth" when contributing to conversations, but most commonly when I feel there is a risk of feeling excluded.

I don't think I struggle with introversion. I do share some traits with being introverted: a love for structure/organisation, a tendency to overthink things, a preference of deeper conversation over small talk, and a hatred of talking on the phone. In general, though, I do prefer to be included and involved in social situations.

For me, social interaction has always been really hard work and often tiring. I am constantly anxious during group conversations and, in particular, when it comes to public speaking.

Cast your mind back to June 2014. I was attending my first ever Codegarden event in Copenhagen with a colleague who I had only really known for a few weeks.

At this point I was using Umbraco regularly and I had joined my local Bristol meetup, umBristol, some time prior to the event. The year before was my first UK Festival and an insight into the wider community, but Codegarden was my first real experience of the international following.

Most of my time at Codegarden was spent in solitude and not getting involved in much conversation or socialising. I stuck closely to my colleague and the few people I already knew, but I missed out on the late-night fun and antics that is common with Codegarden partying.

During a break on the second day, I plucked up the courage to approach one of the speakers who I had seen at the UK Festival. I complimented him on his presentation and his captive speaking style at the London event. I happened to mention that I was interested in speaking at Codegarden and that I had hoped to submit a talk suggestion for the next year.

Taking one look at my lanyard and back at me, he delivered a shocking blow for my confidence:

Why would they pick you? I don’t know who you are. I haven’t read any of your blog posts. What do you do in the community?

It felt brutal. Having plucked up enough courage to speak to someone I looked up to with an idea to follow in their footsteps of presenting to the community, I was knocked down, seriously questioning my being at the event and my opinion of the community of the "Friendly CMS". Never meet your icons or heroes.

Getting Involved with the Umbraco Community

Over the next few days, and certainly whilst at the event, I slowly came to the realisation that he was right. I wasn’t contributing in any way other than developing with Umbraco and having an idea for a possible future presentation. Nobody would know who I was or what I do, so why would the likely even care?

Having met a few other umBristol members during Codegarden, and armed with the critical feedback from the event, I decided to push myself to attend our local meetup regularly, with an aim to become more connected and involved with the local Umbraco community.

I had already helped with hosting some of the talks and presentations, but I would start to attend many more talks and socials, in the hope to become more comfortable and recognisable with the regular attendees and organisers.

umBristol’s first set of talks immediately after Codegarden were held in a small conference room in a local YHA, casually sat around a meeting table. The first session was a few other attendees discussing the event and what was new for Umbraco for those who did not attend. I managed to contribute my thoughts and opinions, actively taking part in discussions about some of the new improvements coming to Umbraco.

It was a great first step and I felt excited to get involved and contribute. Previously I had attended meetups with someone who I knew, using them as a safeguard when talking to others. This time, however, I turned up alone and I started to speak to people who I had briefly or never spoken to before.

After a couple more meetups, I put myself forward for a talk at the next meetup in the new year of 2015. I would, for the first time, stand up in front of my community of peers and talk about Creating Umbraco 7 Property Editors.

When it comes to presenting and writing, I am best when I am creating content about a subject I really understand and when I feel confident in my abilities. This is probably the same for every speaker or author, but for me it means the difference between being reclusive or conversational. Confidence when presenting, it seems, comes with knowledge and understanding of the subject.

I gave a presentation with demos, answered questions to the best of my ability, absorbed the feedback and, most importantly, coped under the overwhelming pressure I had put on myself. I felt happy that I was capable of talking at events of this scale.

Over the next couple of years, I would be involved in hosting a few more talks and attending the majority of the other talks and socials. I would also attend a couple more Codegarden events in 2015 and 2017, and be lucky enough to have been invited twice to CODECABIN, an "unconference" for 20 developers to discuss and share ideas together in a cabin over a long weekend.

It was at CODECABIN 17 where I was able to spend the weekend with other Umbraco developers and peers from around the world. I contributed to discussions, shared my thoughts and ideas, and listened to what they had to say. I also contributed a drinking game that rendered half of the attendees counterproductive for the following day, but the less said about that, the better!

Looking to the Future

In recent months, I have been asked to be actively involved with the planning and organising of umBristol talks and social events. This is an honour and another way for me to give back to the community that I love.

I am continuing to contribute my own talks and presentations to my local community, albeit slightly less fearful than when I first started. I also have an idea for a talk to submit to Codegarden in 2018, but I am not yet convinced I have the mental strength, skills or knowledge to stand in front of a few hundred faces with confidence and conviction. Fear of failure or humiliation is still something I have to contend with.

The Umbraco community has embraced me and it has given me the feeling of being welcome. I have met many people who have been friendly, inviting and encouraging of my involvement. I am often asked "when are you going to get up there and do a talk?". Hell, I was even asked by Jan to write this article, which is an absolute honour and a privilege to even be considered.

If, like me, you have a tendency to shy away from social situations or giving talks, as they can leave you feeling anxious and tense, I urge you to consider connecting with a local community that you are passionate about. It could be your local Umbraco user group, another technical meetup, or even a local knitting group! Just try to get involved by becoming a regular attendee. You never know what might happen if you take that chance.

umBristol was the start of my community involvement and as my journey continues with its amazing members, I am thankful for them giving me a platform where I can push myself past my barriers of social anxiety and fear of public speaking.

CODECABIN and Codegarden have extended my reach in the community, giving me the chance to be involved in the wider, international picture. This is another opportunity for me to be grateful to those who work hard organising these events, allowing those who attend to feel welcome and inclusive.

I should also thank that one person at Codegarden for giving me the motivation to get involved. 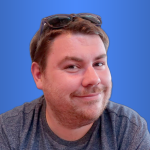