Wasn't it for side projects, I probably wouldn't have worked at Umbraco in the first place.

Let me start with introducing myself. My name is Simon. I'm a self taught designer, frontend developer, conference organzier and community creator. I've spent the last two years at the Umbraco HQ.

In November 2016, I decided to quit my position at Umbraco. I did it to pursue a dream of building projects that had stacked up in my notebooks over the years.

Wasn't it for side projects, I probably wouldn't have worked at Umbraco in the first place. Meaning, if I hadn't organized a conference in Odense, I wouldn't have meet Niels.

In my two years at Umbraco, we spent most of our freedom fridays on building side projects. Some you may already use in Umbraco without knowing it, others didn't see the light.

Freedom Fridays was a great way for us to get to play with new technologies, get crazy ideas and built them or bond with colleagues. Over the last six months I spend a lot of my Freedom Fridays and late nights, building a style guide for Umbraco. A still work in progress tool, but a great opportunity for us to play around with the idea of "One Style guide to rule them all". A plug and play framework for package developers, people contributing to the core, etc. for swift development and consistent design.

I've come to realise just how much of Umbraco is side projects. Packages, PR's to the core and even people responding on Our is somewhere a side project.

Earlier this year, I made together with a good friend, a side project called Type Anything. A small tool that enables you to test typography for your next project. We built the project with Vuejs and integrated it with Typekit and Google Fonts.

It started out with an idea. Of course this idea come to me just as I went to bed making it impossible to sleep. I just had to get the idea out of my head and into my notebook.

It took around a week to build, then rebuild the app before we launched it. We submitted it to ProductHunt to get some fast feedback on the product. This was an easy way for us to get the app exposed at the same time.

Shortly after that we got featured on all sorts of websites, email campaigns etc. Type Anything is now one of the most upvoted projects in 2016.

A simple idea, some drawings in a notebook and 4-5 nights of coding gave me the motivation to learn new stuff and create more. New ideas and new ways of approaching things comes when you just play.

What I'm trying to say with all this is: Make time for play, it's an easy win-win when it comes to dealing with burnouts, motivations blocks or if you just want to learn new stuff.

Keep a notebook next to your bed. So when that next idea comes up that you can't let go off, write it down, draw some mock ups and make it happen. 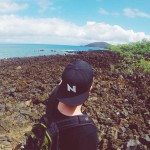